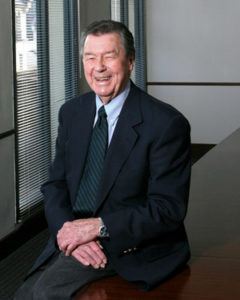 With profound respect and admiration, we remember the exemplary life of our firm’s founder. A gentlemen lawyer, a respectful mentor and colleague, and a true friend to us all.

A thriving business community, a well-respected law firm, an impressive roster of community organizations: All know the handiwork of Warren Thoits.

The youngest of five children, Thoits was born on the 900 block of Forest Avenue, where the house still stands and is now occupied by his nephew.

Thoits himself was a third-generation Palo Altan, his grandfather the founder of a family shoe business in 1891. The grandfather opened Thoits Shoes when he recognized that the distance between the city train depot and Stanford would wear out a considerable number of student and faculty shoes.

Warren made the rounds of the Palo Alto school system, playing football for Palo Alto High and graduating in 1939. He then crossed El Camino to attend Stanford, where he received his bachelor’s degree in 1943 before joining the Navy. He served first on an antisubmarine ship patrolling the East Coast waters and later on a communications ship in the South Pacific, coordinating the landing of troops and supplies on three beachheads.

After the war, Thoits entered Stanford Law School, pursuing an interest in the law that he traces back to an uncle’s ordeal when charged with murder. The uncle was eventually exonerated, Thoits said, but not before spending time on death row. As Thoits sat in the courtroom observing his uncle’s trial, he became fascinated by the legal process and realized it was his calling.

After completing law school in 1948, Thoits joined a Palo Alto solo practitioner, Dave Samuels. When Samuels retired in the early 1960s, Thoits took the reins, building the practice into the widely respected firm Thoits, Love, Hershberger & McLean, now known as Thoits Law. As he grew the firm, Thoits said, his goal was to be not the biggest law practice in town, but the best.

Over the years, Thoits and his family emerged as significant downtown landowners. Living by the motto “Buy, don’t sell,” Thoits helped mold the Palo Alto we know today. He was also the developer of the San Antonio Shopping Center, with Sears as the original anchor tenant.

Thoits was never tempted to enter the political arena, choosing instead to serve the community as a volunteer. Among other notable achievements, he co-founded the Junior Chamber of Commerce in 1951 and served on numerous nonprofit boards.

As a Rotarian, he saw a need for a nutritional program for older adults, and with determination and a little help from his friends, he established La Comida at Avenidas. Mindful of the needs of stroke survivors, he also founded the Peninsula Stroke Association in 1998.

The son of a banker, Thoits’s accomplishments also extend into finance. He is one of the co-founders of Mid-Peninsula Bank, which itself recently won recognition for community service, receiving the Tall Tree Award.
www.linkedin.com